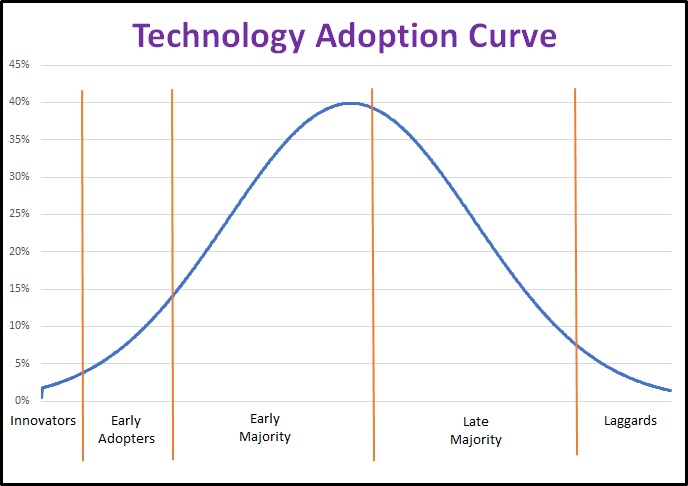 This article was first published on Altfi: here.

Fintech: which side of the chasm are you on?

Our business (PrimaDollar) is a Fintech business. From the outside we look completely like a regular financial services business. This is a choice that we have made for good reasons. This article explores the “technology adoption curve” and why Fintech businesses face a significant challenge.

People buy new (ie: innovative) things for different reasons. Understanding why people make decisions to purchase a “thing” is an essential part of successfully selling that “thing” to them. The academic analysis (Beal and Bohlen 1957) is more complicated, but the model broadly simplifies to two simple categories of people:

But there is more to it than that.

These concepts were then taken on and developed by Geoffrey Moore in his book “Crossing the Chasm” (1991). Geoffrey’s book is required reading for any investor in Fintech and any Fintech CEO.

The Chasm: the gap between early adopters and the majority

Geoffrey Moore points out in his book that early adopters and the majority generally don’t mix socially. Just because the geek next door has bought something, it does not mean that the majority will rush out and buy it. He identified that there is a big gap (the “Chasm”) between these two market segments and that crossing the chasm successfully results in escalating sales through referencing (“my cool friend has one, I should buy one too”). There is a circularity here that has to be conquered to achieve mass appeal. The person in the majority typically buys a product when someone else in the majority has already bought it – but how to make that first batch of sales into the majority space?

Crossing the chasm is difficult.

So what’s the secret to crossing the chasm?

As an occasional visiting lecturer at various business schools, I usually restate the technology adoption curve to students as follows:

This is looking at the chasm problem from two other angles: a) reason to buy and b) product design. The majority does not buy complicated products with an uncertain utility.

But when it comes to money, people are conservative. Financial services are different to consumer electronics. For mass appeal, a successful Fintech business should project simplicity, utility and trust.

Here’s a statistic: Lending Club (leading US marketplace lender) has only got 148,000 investors (after 9 years and a lot of publicity), “Lending Club unveils investor app”. Whilst we would all be proud of that achievement – this is a tiny fraction of the marketplace.

Which side of the chasm is Fintech on?

Fintech businesses are generally on the wrong side of Geoffrey Moore’s chasm. When it comes to money, the majority is risk averse and cautious. It is about trust.

Moreover, we may find that no amount of “transparency” and clever marketing will get Fintech over the chasm. In many respects, transparency reinforces the problem (why do we need to know this stuff?). Transparency can actually make the chasm harder to cross.

Perhaps for Fintech, we need to look more like (or even become the same as) the businesses that we are trying to disrupt – the banks, fund managers, insurance companies and so on.

There are two main options:

At PrimaDollar, we understand how important it is to make our business look as conventional as possible. Our typical supply-side customer (a factory-owner in Asia) likes to do business face-to-face. Our marketing is therefore “steam-driven” by necessity rather than by design. The key to our model is how to remain agile (keeping the cost of sale down) whilst accepting that we have to communicate with the customer using the interface that he prefers. Technology plays a vital role – but deeply buried within the business and not on display. It also means we are often being accused of not being “Fintech”, but we take that as a compliment!

What’s the answer then?

We need to pay attention to the technology adoption curve and we should also take note of our own “cognitive bias”. Fintech investors and Fintech founders are naturally early adopters. Our potential customers (in the majority) are not.

Maybe we won’t be able to beat them (banks, insurers et al), maybe we have find a way to join them.